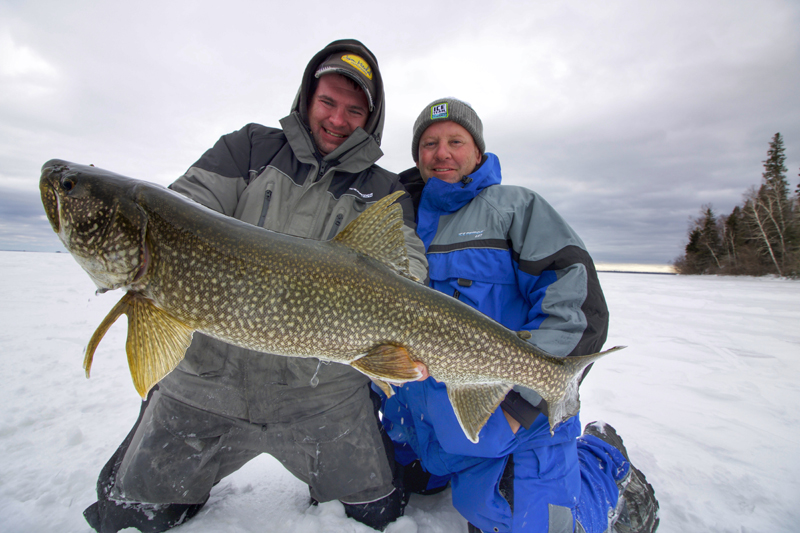 Our travels take us across both the United States and Canada each winter in a quest to explore some of the best ice fishing destinations.  Some road trips return us to consistent and dependable ice fishing opportunities that rise to the top of our “must fish” list each winter.  Of course, we also try and mix in the old with the new, exploring new destinations that are peaking or somehow flown under our radar.  We make a conscious effort each season to travel to new areas and see new fisheries. Often, the locations that ice fishing for lake trout takes us are some of the most remote.

There is no doubt that more ice anglers are traveling and there aren’t as many secrets.  In today’s world, word can travel incredibly fast and I still marvel at how far some anglers will travel to capitalize on a hot bite.  A hot trend we are seeing amongst hardcore ice anglers are remote adventure expeditions where teams of ice anglers will push back into hard-to-reach and remote fisheries where the ice fishing adventure resembles a backcountry big game hunt.

Lake trout are often the quintessential fish for adventure with ice fishing.  Ridiculously deep snow and no cell phone service are often the norm.  Expect to be covered in sweat one moment and fighting frostbite the next.  The locations where big lake trout live will often push both you and your equipment to the max.  Crucial daylight hours will be spent shoveling snow to get a snowmobile unstuck.  A ten-inch gas auger with two feet of extension on the flighting is about as good of a workout program as there is.

Of course, the toll and tuition are worth the reward.  Big lake trout are one of ice fishing’s most prized fish.  A top-of-the-line predator that can shoot up thirty feet or more in the water column to outswim a jig or spoon getting reeled up as fast as you can reel.  A hard-fighting fish that will snap graphite rods like match sticks.  A fish that will destroy a tip-up by spooling the tip up and snapping a plastic tip up at the base if the knot doesn’t break at the spool.

Yes, big lake trout are incredible and when these fish get big, they take on a prehistoric demeanor that can warm the coldest hands.  I was first introduced to lake trout fishing in Whitefish Bay on Ontario’s side of Lake of the Woods several years ago and have been hooked ever since.  What can be amazing about winter lake trout is the simple fact that we have caught big fish in well over a hundred feet of water and in as little as five feet of water.  These fish seem to cruise continually like sharks.  There is a certain randomness or predictableness with lake trout under the ice.  Despite the sometimes lack of a definitive comfort or temperature zone under the ice, many patterns and strategies ring true and bear repeating.

“A room with a view,” is what Colorado Ice Team Pro Bernie Keefe describes as a perfect location for finding lake trout under the ice.  Deep structure that stair-steps down into deep water.  These deep benches and ledges are classic lake trout locations that seem to produce fish everywhere we travel.  Keefe honed his lake trout expertise on Colorado’s Granby Reservoir but these classic locations are the rule in other classic lake trout fisheries like Ontario’s Lake of the Woods and some of Manitoba’s top drive to lake trout water like Reed Lake, Clear Lake and Kississing Lake.

Large round boulders often make a good location even better.  Deep structure that coincides with rock is often what separates the great spots from what appears like similar and not-so-productive locations on a lake map.  Montana’s Fort Peck Reservoir can be a tremendous ice fishing destination for lake trout.  In the past, many of our very best winter lake trout locations all had one factor in common… close proximity to deep water and large rocks.

Besides the classic “room with a view” location, a runner-up location would be pinch points and funnels especially if there is some current.  Troughs of deep water that connect basins or lakes are often prime winter lake trout locations.

Now for the disclaimer regarding the classic lake trout locations described above.  These types of locations are often where you will find the most lake trout and some big lake trout at that but, we often see some of the biggest lake trout each winter come from depths that are less than twenty feet.  Shallow water lake trout patterns don’t get discussed as much but typically when you do find lake trout in shallower water, they are usually big fish.

What is fascinating about lake trout on different bodies of water, however, is just how unique each ecosystem can be.  Extremely large water like Lake Superior has a current factor that has a huge influence on fish movements.  The current demands that anglers fish out of a hole and drill a second hole for their transducer so that the lure can be swept into the cone angle.  Depending on the depth, that second hole with your transducer might be ten feet or more away from your jigging hole.  Some anglers will even modify their transducer by attaching it to an arm or boom that can be pointed.  The current will often rip and pulse where changes in the current’s intensity will trigger waves of fish to feed.  The lures need to be heavy enough to cut the current.  The hooksets over deep water with massive current often must be exaggerated where the angler has to back away from the hole several steps to hook up.

Away from the Great Lakes where strong currents aren’t typically as much of a factor, a trend we are seeing on so many fisheries is more finesse.  A classic white tube jig is perhaps the greatest lake trout lure of all time but many lake trout anglers are gravitating towards lighter line and smaller presentations.  The Clam Pro Tackle Leech Flutter Spoon has been an incredible lake trout lure for our team over the past couple of winters.  Larger lure profiles still work but anglers are starting to embrace smaller lures that would traditionally be considered “walleye lures” with great success for lake trout.  Across the board, downsizing lures while matching up with the appropriate rod action and line is producing a lot of big trout.

As ice fishing has grown in popularity, more camps are staying open through the winter providing accommodations on top-tier fisheries when a decade ago, many of the camps closed in October after the spawn.  Robert Tolen’s Vic and Dots Camp (www.vicanddotscamp.com) on Lake of the Woods is located just over the border at International Falls and has emerged as a popular base camp for groups of ice anglers that have their own snowmobiles.  Manitoba currently offers several under-the-radar lake trout fisheries that are drive to.  Wekusko Falls Lodge is an easy drive from Winnipeg and is in the heart of incredible multi-species ice angling that includes big lake trout.  The list keeps growing each year.

Perhaps the surge in lake trout popularity is driven by more reliable equipment, notably snowmobiles that are more dependable.  No doubt that GPS and clothing have both come a long way.  Even helmets are better.  What is also driving this popularity however is big fish.  Good catch and release practices and regulations are conserving and improving the big fish potential on many fisheries and for many ice anglers… lake trout are the apex predator.

Ice Fishing Extreme Conditions: How to Battle the Elements

Jason Przekurat’s tournament resume is full of top finishes when the fishing conditions were tough. In this JMO Podcast episode, JP helps us understand how to fish effectively in windy conditions… tough conditions we all want more help with. This episode is full of great tips and tactics for fishing big winds where you may have the best day of walleye fishing you’ve ever had.

If you haven’t already, please subscribe to the channel and share with your fishing friends. Head to the comments to ask more questions or recommend topics for future episodes. Thanks for listening!